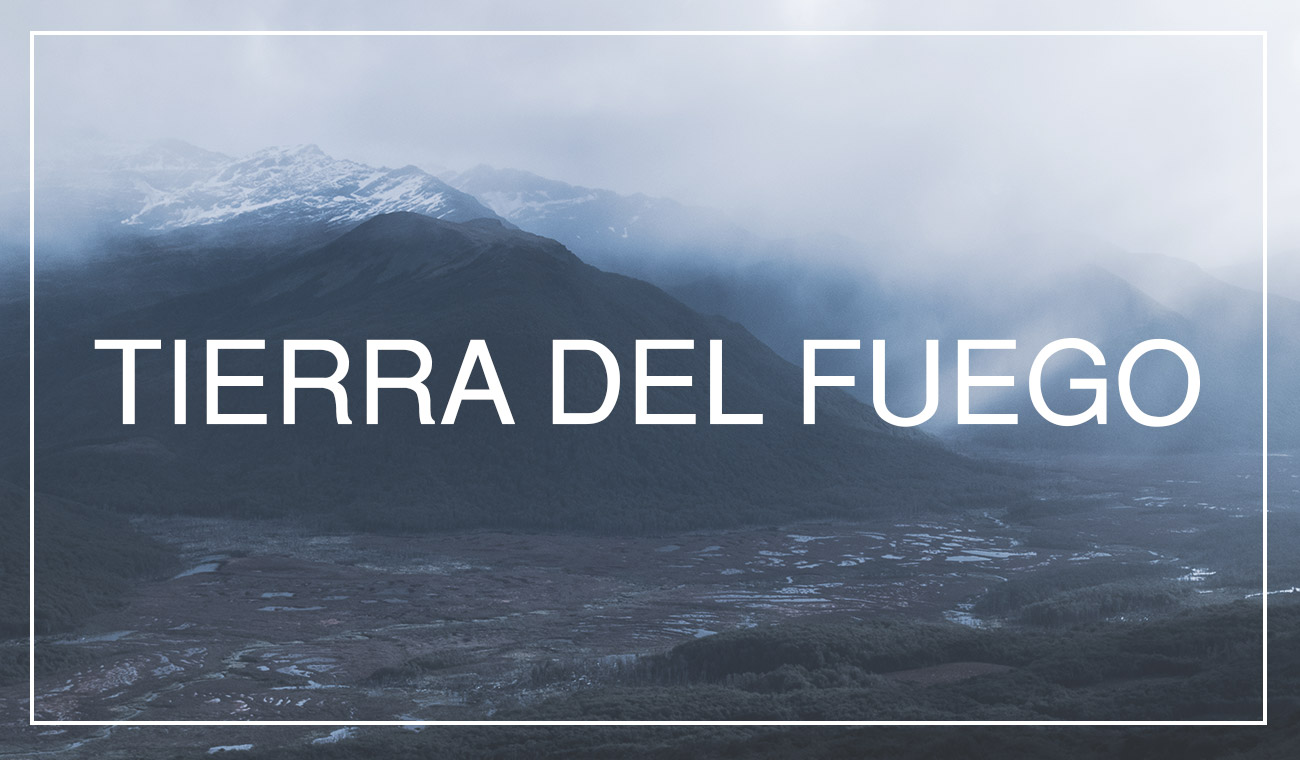 This post is all about the Chilean side of Tierra del Fuego and Punta Arenas. In other words – the most southern region of Patagonia Chilena. If you’re interested in visiting Chilean Patagonia, make sure to check out my extensive post about planning the trip!

As you can see on the map, we chose 3 major points of interest on our journey (the yellow regions) and number one was Punta Arenas and the Chilean part of Tierra del Fuego (the yellow shape in the very bottom).

On your journey around Chilean Patagonia, you’re most likely to travel to Punta Arenas by plane, probably from Santiago. This flight takes a bit over 3 hours and the most common airlines are LATAM and the low-cost airline SKY.

We chose SKY, since their prices were unbeatable and it turned out to be totally fine. As long as you don’t expect any refreshment or English on board.

Once you arrive in Punta Arenas, collect your baggage and leave the security area. You will be approached by a couple of taxi drivers offering you to take you to the city.

It might get overwhelming but you may trust them and just pick up one. As long as their price is 10.000 Chilean pesos per car (14 EUR / 16 USD), there is nothing shady about them. The airport taxi business is regulated in Punta Arenas, that’s why the fixed price.


When in Punta Arenas

I wouldn’t say that Punta Arenas is a beautiful city. However, the city centre does have a slightly colonial flair. Besides, it is simply the best base for whatever activity you plan. I can highly recommend booking your hotel in the centre as the city itself is well spread in a large area.

A great thing to do! This trip will bring you to Isla Magdalena, where a large colony of Magellan penguins settled down. Isla Magdalena is a small island where you’re allowed to walk around on footpaths literally inches away from penguins, who seem not to care.

Amazing experience. The boats are only allowed to stay for 1 hour, so plan your time well and don’t expect to stay longer.

Depending on provider and weather, you’ll also shortly visit (=get close by boat) Isla Marta, where a colony of sea lions dwells. We booked with Gray Line Chile and were more than happy!

Although this heading does sound a bit like the famous Horse and Hound scene from Notting hill, doing the trip organized by Kayak Agua Fresca is something you really should consider!

We chose their trip which consisted of ca. 2 hours kayaking and 2 hours horseback ride. We were picked up at our hotel and drove first to Agua Fresca, south from Punta Arenas. There we got some briefing and off we went.

This was a great experience as my wife and I have never done any kayaking before. We were lucky to see a couple of dolphins not far from us, simply amazing! After a light lunch, we set off for the second part – the horses. I mean – you’re riding a horse at a beach on a beautiful day and you can still see the dolphins in the sea. Can it get any better?

If you’re a vegetarian, you’ll have a hard time throughout the whole trip, since the Chilean cuisine is quite meaty. We were advised by locals to try Sotito’s and La Luna. However, because we are almost vegetarians, we’ve always ended up in a pizzeria. More precisely in Mesita Grande, which was quite reasonably priced and delicious. Our very favourite café during the stay was the Wake Up Café. A bit hipster, excellent food and great coffee (great coffee is not exactly common in Patagonia…). Besides restaurants, you should definitely try and grab some empanada in a bakery!

Probably the most popular spot for photographers is the old pier next to Casino Dreams (exact location here) Another great spot which I hadn’t the chance to visit is the Lord Londsdale shipwreck. It is located further south of the city and the easiest way to get there is by taxi. There are also other shipwrecks in the area.

Doing this was a hard but one of the best decisions which turned out to be one hell of an epic adventure. All thanks to guys from TDF Patagonia, who deserve huge thanks and compliments for what they’re doing (this message isn’t sponsored, it’s just my opinion :)).

How to get to Tierra del Fuego

Although our guides Patrycja and Cristian picked us up in Porvenir, the capital of the Chilean Tierra del Fuego, we needed to get there first.

Which means hopping on a ferry from Punta Arenas and crossing the Strait of Magellan. When I say “hopping”…I rather mean running around the ferry terminal and making a very desperate “I’m a confused tourist” face.

Check out the timetable on tabsa.cl before you plan anything. It can change depending on the weather.

A single ticket cost 6.200 CLP (ca. 10 EUR) in 2018, you can only pay in cash. Reservation is recommended but in our case, the online form didn’t work. It seems that the website only works when you’re in Chile.

Luckily, Patrycja from TDF Patagonia reserved the tickets for us which saved us lots of time and many attempts to explain what we want in Spanish.

The ferry terminal for crossing the Strait of Magellan is located at the Tres Puentes port. So you’ll most likely need a taxi which should cost about 5 EUR from the city centre.

Why did we decide to do an organized tour to Tierra del Fuego?

It took some time to realize that but – Tierra del Fuego IS the end of the world. And whereas on the Argentinian side, you have some pretty good level of infrastructure, the Chilean side is well behind.

Which, from the environmental perspective, is a good thing! So we felt like it would be way too much of a hassle to rent an expensive 4×4 car in Punta Arenas, get it on the ferry and then offroading around Tierra del Fuego with no knowledge of the area.

Besides, there are certain rules we had no idea about (e.g. contacting the police when you visit certain areas). And our Spanish is very minimalistic.

Going with a guide is the safe option – you’ll have someone who knows where to go if something goes wrong. Or who to call with their satellite telephone. And speaking from my own experience with TDF Patagonia – it still felt very adventurous!

Chilean Tierra del Fuego – what can you see and experience

It depends on which tour from TDF Patagonia you choose (these guys are also very flexible so you can ask them to adjust the program!). We went for “Karukinka Expedition” which lead us to the Karukinka Natural Reserve. We were lucky to be the only guests on the expedition, this made it so individual and special!

Porvenir – the capital of the Chilean Tierra del Fuego

Our first stop was in Porvenir, where we visited the local museum and found out a bit about the local history, (surprisingly) about Croatian immigrants who formed the area in the 19th and 20th century. And also about the shockingly sad history of the natives – Selk’nam people.

Next, we drove (dirt road) along the coast of huuuuuge and beautiful bay with poetic name Bahia Inútil (Useless Bay).

We saw dolphins hunting very close to the coast, jumping around and enjoying themselves. Already a couple of kilometres behind Porvenir, you feel that you’re getting to the end of the Earth.

I have never seen so many animals in such a short time – dolphins, condors, caracaras, flocks of guanacos, Patagonian foxes, Magellanic geese, flamingos. Animals popping up pretty much anywhere will make you keep your shutter speed at 1/1000 and faster!

Once we had to stop for like a half an hour since there was a massive herd of sheep in front of us.

And that was not all, the goal of the day – king penguins! There is a small colony close to Onaisin settlement and graveyards, in the middle of the bay.

King penguins are about 1 meter tall, staggeringly beautiful creatures and you’d rather expect them in Antarctica. But they’re also here. Just do not expect them as close as on Isla Magdalena, this is a completely different experience!

One good piece of advice - there are also some providers that offer one-day tours from Punta Arenas to the Parque Pinguino Rey. Don’t do it, it’s insane! You'll spend the entire day in a bus (10 or more hours) for 30 minutes with penguins. A fine example of unsustainable tourism.

After we spent more than an hour watching the penguins (again, I cannot thank Patrycja and Cristian from TDF Patagonia enough), we continued our journey towards the magical Lago Blanco. This lake is as deep in Tierra del Fuego as you can imagine. It was our home for the next two nights.

The next day brought us spotting even more animals and a spectacular hike through the pristine forests of Karukinka Natural Reserve. This place is so uninhabited that it makes you really kind of nervous.

During the entire day of hiking, we haven’t heard or seen a single person. Nor sign of any human activity in the last million years or so. However, what we’ve seen was the Cordillera Darwin. The very last mountain range you can see before Antarctica.

View of the Lago Deseado

To our surprise, our guides took us after the hike even closer to the Cordillera Darwin by car, to the viewpoint of Lago Deseado. The moment we arrived was like a page out of Jules Verne’s book.

One of the most beautiful places I’ve ever visited, where rays of golden sun and light rain occasionally painted rainbows across the sky. Pristine, lush and so deserted, in absolute silence. We stand at the end of the world.

Tierra del Fuego is fantastic for wildlife photographers, so make sure to bring a lens as long as the country of Chile itself! 🙂

Also, if the wind blows clear sky for you, you might see the most wonderful night sky in your life there. The Milky Way is much milkier here than the chocolate bar of the same name.

For shooting the night sky, you will need a very stable tripod and a good lens with high aperture. If you’re not sure what it means, check out my article on this topic!

The landscape changes from endless flat pampa to high snow-covered mountains. The wind is omnipresent and the weather and light conditions on location can change very fast. Be prepared and have your camera always ready!

What to wear in Tierra del Fuego

Functionality and layers are everything! Don’t be fooled by weather forecasts or by the fact it’s actually “summer” there. The wind you’ll get in TDF can be brutal.

So bring anything that has the word fleece and water- or wind-resistant in the name. Good hiking shoes are very important as well!